The Story of Breast Cancer Warrior 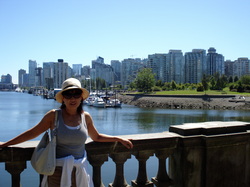 In the summer of 2007, I was diagnosed with breast cancer just when I thought I had everything going right in my life.  I had a mammogram exam after skipping it for 2 years having been so busy. The doctor found a lump on my left breast.

I was referred to the City of Hope which is well known for its remarkable treatment and research in cancer.

I was very comfortable with the medical staff at the “Women’s Health Center” which exclusively focuses on women’s health at City of Hope.

I had an ultrasound exam then a needle biopsy that showed I had malignant cells—in other words, cancer. I was so shocked I still cannot remember how I got home that day when the doctor told me I had cancer.

After the diagnosis, everything went so fast.   I would like to give a big credit to the medical staff at Women’s Health Center at City of Hope who efficiently guided me through the process of treatment very comfortably.   I also don’t know how to thank my dear daughter Susan, helping me do research about breast cancer and treatments.

We went on the computer so many hours every day to learn and understand what was going on with my breast cancer and treatment. We even researched each breast surgeon’s background online to look for who would be the best surgeon to remove my cancer.  We found Dr. Benjamin Paz at City of Hope. He had remarkable experience and was also Director of the Women’s Health Center. I humbly requested to City of Hope that Dr Paz perform my surgery.

I got a phone call that my request was accepted.  I had my first consultation with him a few days later.

I remember at that first consultation, his eyes were full of compassion with regard to my situation. He explained where and how the cancer started in my breast (with drawings even) and our further treatment plan. My daughter brought her laptop and told Dr. Paz she was going to record every single word he would tell me. I felt that she was so protective that she may have offended the doctor that she did not anyone to make a single mistake in my treatment.   He smiled and said “you can record anything you want.”

It was not an easy time when the doctor had to determine what kind of tumor I had and what kind of surgery I needed.

The MRI exam I had before the surgery showed so many suspicious spots, I was told I might have to lose both breasts. I had to go through another set of biopsy exams which was the most painful experience in the entire treatment.  The biopsies came out all negative for cancer except the lump on my left breast.

I remember that when Dr Paz told us with his big smile that all other spots were negative and that I only needed a lumpectomy I and my daughter Susan cried through the entire appointment.

My surgery went very smoothly and I was recommended to receive a new radiation therapy called Mammosite, which is radiation treatment for concentrated to the site of the tumor given for 7 days, twice a day instead of 6 weeks of conventional treatment to the whole breast.

We have learned so much from the websites of many different breast cancer organizations. We learned that  Mammosite was performed at only 2 hospitals in California at that time. It had 10 years clinical proof that showed great results.

It has been 3 years since my cancer treatment, and I just read an article about how local radiation treatment is now more recommended over whole breast radiation in some cases now.

My tumor was more than 2 centimeters that I was on the borderline of receiving chemotherapy.

My tumor did not invade any lymph nodes which meant cancer cells were less likely to spread to other parts of body. However, my dear oncologist, Dr. Mortimer, recommendeded light chemotherapy just in case.

When she brought up the possibility of chemotherapy, I freaked out so bad. I was panicked! First I thought about losing my hair, and I just had a very expensive hair straightening treatment, then vomiting, and my main concern was not being able to work for many days. I worried about my financial stability. I was a single mom and was self-employed with my own business so that if I didn’t work, there would be no income.  My daughter was a pre-med student in college. She was receiving a full scholarship, but I still had to support her living and my living.   I refused right away that I felt so bad now that I had an attitude and was not very nice to my oncologist who was trying to save my life. Then, Dr Mortimer prescribed the OncotypeDX test, which can help determine a patient’s risk of recurrence and response to chemotherapy. We learned that this test is very useful for cases like mine that are strongly estrogen receptor positive.

I was so lucky to have Dr. Mortimer as my oncologist.  The Oncotype DX results showed low risk of recurrence, only a 3% higher rate of risk with hormone therapy alone with Tamoxifen if I didn’t get chemo.  I decided to not have chemotherapy and improve my immune system and prevent recurrence by changing my daily lifestyle.

I believe that cancer was a sort of wake up call for me.   I had taken my healthy body for granted. I now feel like my body is under my control, being healthier than ever before being appreciative of my body and of living life. I have changed my diet as a semi-vegetarian and love cooking healthful meals at home every day. I enjoy exercising to boost my mood.  Since my experience with cancer, I treasure my time with my family and friends, because now I know, life does not exist forever. I have to enjoy life every moment of every day.

The Story of the Daughter of a Breast Cancer Warrior 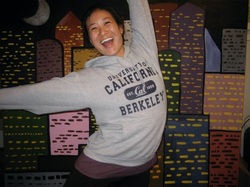 Three years ago in July of 2007, after submitting my last final exam for my summer courses, my mom arrived in Berkeley days early to take me back home for the remainder of the summer. She was oddly quiet and distant while I packed. An hour had passed in silence until she finally said, "They left me a message, and I couldn't wait a few days to see you...well, they think I have cancer." That last word echoed in my head and haunted me. I thought back to five years before when one of my best friends had lost her own mom to cancer, and the fear of that possibility crept in.

Raising me since I was five years old as a single parent, my mom did everything in her power to be both a good mom and dad. She has been the one person in my life I could always count on. While she had a busy schedule running her own skin care salon and pursuing new business endeavors (i.e., working for our survival), she still managed to take care of me: making me a Meeko (the raccoon from Pocahontas) costume for Halloween from scratch one year after a fair amount of begging on my part, putting up with me during my rebellious pre-teen years, cheering me on at dance performances, and skyping me every night in my freshman year of college because she knew how homesick I was. I had naively thought my mom was Superwoman and would always be okay, but she was not. I wanted to be there for her as she had been for me my entire life. So in that moment when she told me she had breast cancer, I hugged her tightly and told her, "It's okay, Mom. We're going to get through this together."

Together not only meant my support and love, but it also encompassed the care of her doctors and the advancements made in science--the two vital sides of medicine. I appreciated and was relieved by the humanity of her compassionate doctors at the City of Hope, especially when a family friend had suggested my mom have her breasts "chopped off", a term which vaguely reminded me of butchering meat. In contrast, her surgeon, Dr. Paz, made her feel more at ease by thoughtfully addressing her concerns about the appearance of her breasts after surgery. He acknowledged her as a human being with feelings rather than a vessel of disease or meat on a chopping block. At the same time, the advancements in breast cancer research provided us with the therapies that effectively eliminated my mom's cancer. Through this experience, I discovered that it was the sum of these parts in medicine that best aids us in times of sickness. Without one or the other, my mom would not be the healthy, happy person she is today. It inspired me to pursue a career in medicine both as a physician and a scientist.

Currently, as a clinical research assistant at the City of Hope, I am working on a project investigating the relationship between the advent of newer chemotherapeutic agents and survival in recurrent and de novo metastatic breast cancer. From being involved in breast cancer research and having gone through my mom’s breast cancer, I feel that I have learned much about this disease since those dark days after she told me of her diagnosis. At that time, the plethora of information out there--searching Google and PubMed to get my hands on whatever information I could find out about breast cancer--was all too much on top of the anxiety and fear that a cancer diagnosis inherently produces. So, I hope that you find this website useful, offering information and clarity about the disease as well as support.